Today on the blog, I have the privilege of introducing you to a very sweet and talented friend of mine. I met Robin at the Allume Conference last year when I was, like, a thousand months pregnant and wishing I could be put to sleep until I gave birth. So it is very fitting she happens to be the author of a book highlighting the ups and downs of motherhood. Take it away, Robin … 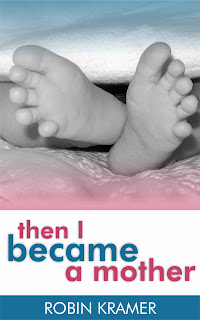 I’m honored that Susan has allowed me to introduce myself and share about Then I Became a Mother. Occasionally, I refer to the book by its acronym: TIBAM.

Of course, you’ve got to pronounce it correctly. The stress falls on the second syllable. TI-BAM! (Feel free to imagine me saying this while holding my fist aloft or giving my thigh a good-natured slap. There’s some power behind the utterance.)

Most often, though, I find myself using the expression when I notice something about my environment – or about myself – that wasn’t evident eight years ago before I became a mother.

When I slide open the top rack of the dishwasher and notice that every item is either a plastic bowl or cup, for instance, I chalk it up to TIBAM.

When I memorize the entire PBS cartoon line-up, it’s because of TIBAM.

When I’m woken before six in the morning by a child with an urgent, yet remarkably random question (Is it true that the national bird is an eagle? Would a stamper work on my sister’s head?), TIBAM is written all over it.

When I rummage in my purse to search for car keys but instead find a diaper, Goldfish cracker crumbs, a naked Barbie and a pine cone, it’s due to TIBAM.

When I see the young mother in the supermarket – the one hushing her crying newborn, the one who feels like the walls are closing in on her, the one whose eyes reveal the weariness inherent in new motherhood – I want to hug her and whisper in her ear that she’s going to make it. I know because of TIBAM.

When I understand that it’s possible to be as equally thankful for bedtime at night as it is to be awestruck by little faces in the morning, I utter a quiet TIBAM.

When I find myself rushing some days because of the tedium and desperately clinging to them because of their goodness, I recognize that it’s all part of TIBAM.

Then I became a mother. TI-BAM! It changes everything, doesn’t it?

To celebrate mothers this week, Then I Became a Mother is on sale for just $2.99. If you know a mother with young children, this is a perfect Mother’s Day gift for her. And if you are a mom of young children, let this book speak life, humor and encouragement to you right where you are.

Which, if you’re like me, is a kitchen with a sticky floor and an overturned bucket of Legos.

Thanks so much for sharing, Robin. Read reviews of the book and watch a brief TIBAM trailer at Robin Kramer’s blog.

Oh and, before I go, I want to share a special TI-BAM! moment of my own with you. 😉 After months of training my son to press his lips together to form the word “Ma-ma,” this is what I get …