You may recall we recently encountered a bit of a problem with a certain family of furry vermin taking up residence in our attic. 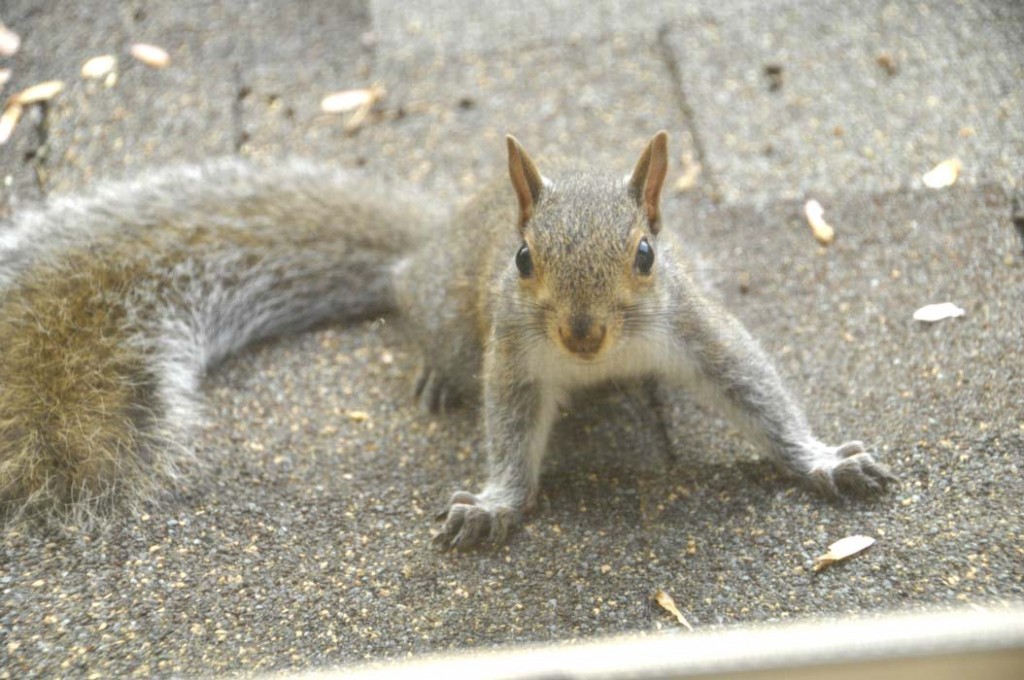 After this guy stared me down through my master bedroom window, I realized it was time to get serious or we would soon become the subject of an Alfred Hitchcock film.

In my post on stuff you won’t see in Better Homes and Gardens, I mentioned the hubs was using some interesting tactics to get rid of our squirrel problem. 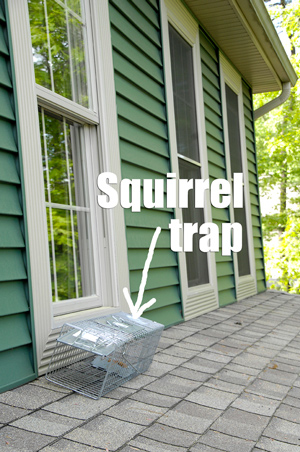 Why is the trap on the outside of the house, you ask? Won’t that just attract all the squirrels in the neighborhood, you ask? Well, let’s just say that after being married to my man for 13 years, I’ve learned it’s best not to ask questions. 😉

Using his method, we trapped and relocated an entire family tree of squirrels (What? That isn’t your idea of a fun weekend activity?), but we weren’t confident the problem was solved.

So I decided to try some different tactics. I started with the old mothball standby.

In case you don’t recall from hiding in your great grandma’s closet, mothballs stink. Seriously. And apparently, squirrels hate the smell of mothballs and won’t come near them.

So I armed myself with a box of the stinky pellets, then climbed through the scuttle hole into our attic space where I planned to drop a handful of them. Note: Upper arm strength is a definite plus when attempting to climb into attic hatches.

After I made it into the attic (and immediately vowed to do more push-ups and pull-ups on a regular basis), I took a mini flashlight in my mouth and proceeded across a path of boards to the other end of the house. I had to make sure I stepped in the middle of the boards to avoid Chevy Chase’s attic experience in Christmas Vacation. The only difference between his experience and mine was about 500 degrees. I knew I needed to complete this operation quickly or I would pass out from the heat and be found days later face down in a pile of insulation.

During my quick attic inspection I discovered quite a bit of damage. This family of squirrels had nearly chewed completely through our electric and cable wires and had made a nest in the insulation. I now understood why my dad calls them “limb rats.” I was ready to move from Mission: Squirrel Eradication to Mission: Artillery Attack.

But I kept my cool – despite the fact I was drenched in sweat – and looked for holes where the squirrels might be getting into the house. I found one obvious spot and filled it with expandable foam sealant (from a spray can).

I then scattered some mothballs strategically around the place. After that, I violently choked and gagged on a bit of fiberglass insulation I had inhaled, so I called it quits and lowered myself back down the attic hatch.

A few days later, you could literally smell the mothballs before you entered our home. That’s how strong the odor was! Turns out, mothball gas is denser than air, so the smell easily permeates through the ceiling into your living space. Nice.

So I took another trip to the inferno, this time to retrieve all the mothballs I had laid out. Cue Phase 2 of the mission, which basically involved my husband in the backyard with a pellet gun shooting every squirrel and chipmunk he laid eyes on. Good thing we live in the country. 😉

The verdict? So far no squirrels have returned to our attic. With the holes sealed, the faint odor of mothballs in the air and my husband on 24-hour combat surveillance, I think we may have solved our problem. For now …